A Brief History of the Church of St. Pius X 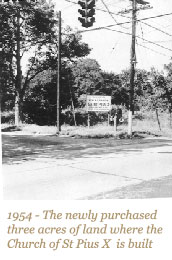 The Church of Saint Pius X was established on May 29, 1954, the day our patron saint, Pope Pius X, was canonized. It was the first parish to be dedicated in honor of the new saint by Francis Cardinal Spellman. The new parish was created to accommodate the rapidly growing Heathcote area and the families who attended Immaculate Heart of Mary Church but lived some distance from it.

The Archdiocese had purchased three acres of land in Scarsdale, New York so it was decided that the Church would be erected on this land. Reverend Clement J. Rieger, the first pastor, lived at the Immaculate Heart of Mary rectory until a house next to the Pius X property was acquired to become the rectory.

Monsignor Rieger celebrated daily Mass, heard confessions, performed Baptisms, and held Holy Week services in the living room of the rectory. The American Legion, now Scarsdale Kids’ B.A.S.E. & The Little School, allowed the new parish to use the Legion Hall on Mamaroneck Road as a temporary church for Sunday Masses. Monsignor Rieger convinced Mother Kevin, Superior General of the Congregation of Dominican Sisters of Sparkill, within hours of her election, to serve the parish school. Under the leadership of Pastor Rieger, the Marian Guild and the Men’s Club were formed to foster the spiritual and social activities of the parish. Monsignor Rieger is credited with making the Church of Saint Pius X a close community. 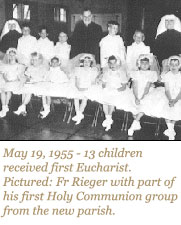 In February 1955, Cardinal Spellman approved the plans to build a church and a school with eight classrooms and an auditorium. It was decided that the school auditorium could be used as a multipurpose facility – a gym, a temporary chapel, a meeting place and the site of parish social events – until a church was built. In August 1955, the groundbreaking ceremonies for the temporary Church and the school took place. Eventually a convent was added to the parish and Cardinal Spellman dedicated the school, convent and rectory in 1957. The school of the Church of Saint Pius X graduated its first class on June 26, 1960.

Following construction, the Church and school were $900,000 in debt. Because the parish was only able to raise $157,000 from 300 registered parishioners, the plans to build a new Church were scrapped, the property upon which the Church would have been built was sold and the multipurpose auditorium became the Church without any change to the exterior of the building to distinguish it from the rest of the school building.

In December 1968, Monsignor Stephen J. Kelleher became the second pastor of the Church of Saint Pius X. He created many enduring programs including the Religious Education Program and he oversaw the adoption of our sister parish, St. Luke’s, in the Bronx. 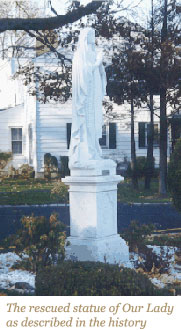 In 1972, Monsignor Riordan was appointed as the third pastor of our parish. Under his supervision, the Church, sacristy, main altar and front lobby were renovated. In 1973, the donated stained glass window of the Pieta which was moved to the Meditation Chapel to Mary in the Narthex in 2015, was completed and the statue of Our Lady, in the parking lot in front of the rectory office, was rescued when the Cenacle Retreat House closed. In February 1974, the parish mourned the sudden passing of Monsignor Riordan.

Monsignor Edmond Hammer was named our fourth pastor in 1974. He instituted a Mass on Halloween to commemorate the origin of the Mass, “All Hallow’s Eve”, and a morning children’s service on Good Friday. In 1975, the parish debt was retired in part by the sale of the convent and three lots across from the rectory, and generous donations from parishioners.

Monsignor Francis J. Melican became our pastor in April 1978. He served our parish for 20 years fostering educational and sacramental enrichment for the parish family. Under Monsignor Melican, the role of the laity was expanded, the parish’s first Eucharistic Ministers were trained, and family Communion breakfasts, a Mass for the Anointing of the Sick, the Liturgy Committee, the Childrens’ Choir and the Family Mass were established. In 1979, the parish celebrated its Silver Jubilee. Monsignor Melican died on July 30, 1998.

During Monsignor Melican’s tenure, two parishioners, William J. Hill and Theodore Gaskin, were ordained as deacons and assigned to serve the Church of Saint Pius X. Deacon William J. Hill was ordained in 1984 and served our parish until his death in 2011 in many ministries including training altar servers, chairing the Liturgy Committee, encouraging and supporting the founders of our Youth Ministry, and helping the elderly and homebound. 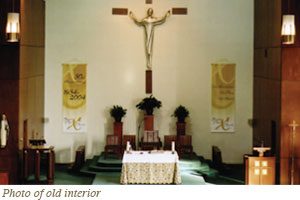 Deacon Theodore Gaskin was ordained in 1991 and continues to serve our Parish and the community. He has served as the Spiritual Leader of the Legion of Mary as well as the Spiritual Director of the Westchester Rockland Curia and is currently the Chaplain for the Police and Fire Departments and the American Legion in our area. He continues to bring Communion to the sick and homebound on a daily basis.

In July 1998, the Reverend John P. O’Brien was appointed Parish Administrator, and on September 19, 1999, His Eminence John Cardinal O’Connor elevated Reverend O’Brien to the position of pastor of the Church of Saint Pius X. Reverend O’Brien brought to our parish his vast experience in education and spiritual and religious formation as well as his quiet strength and gentle demeanor. Reverend Francisco Sebastian Bacatan, a member of the Religious Community of the Disciples of Mary (Alagad ni Maria), joined the parish as Associate Pastor in 2000. 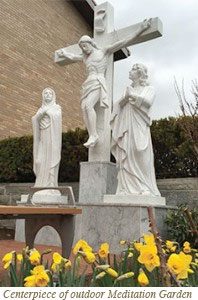 In 2005, the Archdiocese of New York closed the school of the Church of Saint Pius X because of declining enrollment and the associated loss of revenue that resulted in the accumulation of $330,000 in debt owed to the Archdiocese for teacher benefits.

Despite the closing of the school, the parish and its Religious Education Program and ministries continued to grow. The French American School of New York leased (and continues to lease) the school building during school day hours and the debt owed to the Archdiocese of New York was paid.

Reverend O’Brien, our beloved pastor, died in December 2009 after a short battle with cancer.

Reverend Bacatan was appointed Administrator of the Church of Saint Pius X and, on July 15, 2010, the Archdiocese of New York, under the leadership of His Eminence Timothy Cardinal Dolan, appointed Reverend Bacatan our seventh pastor. The Church of Saint Pius X is the first church in the Archdiocese of New York to be entrusted to the pastoral care of the Religious Community of the Disciples of Mary (Alagad ni Maria). 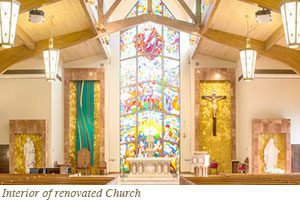 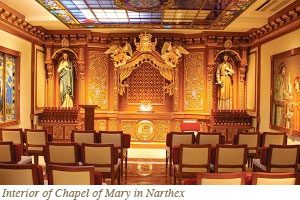 remodeled and updated, including the reversal of the interior direction of the Church, new custom-designed stained glass windows, a new marble Altar, Ambo, Tabernacle House and stand, Baptismal Font and statues as well as specialized seating for our handicapped parishioners. The new worship space was dedicated on June 30, 2013 in a Mass of Dedication celebrated by His Eminence Timothy Cardinal Dolan, Archbishop of New York.

In the Spring/Summer of 2014, the placement of an outdoor devotional with walking Stations of the Cross around the property was completed and in April 2015 a new dedicated new entrance to the Church or Narthex was finished. The Narthex provides additional seating in times of high capacity and includes gathering space with facilities to accommodate receptions, a new Meditation Chapel to the Blessed Mother, a bridal waiting area, new Religious Education offices, storage 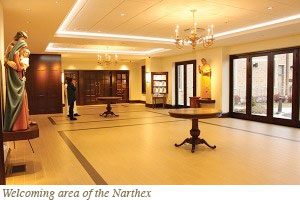 closets for donations, bathrooms and a glass memorial wall. Construction of a new outdoor Meditation Garden with a seating area and marble statues visible from the Narthex was completed in the Spring of 2015.

The outdoor Devotionals, Meditation Garden and Narthex were dedicated by the Most Reverend Dennis J. Sullivan, Bishop of Camden on October 25, 2015.

The St. Pius X Pipe Organ
Music, an essential component of the liturgies at St. Pius X, brings our prayer and worship to life resulting in a deeper spiritual and communal experience for our congregation. Our music ministry is a multi-faceted model that consists of the St. Pius X Choir, the St. Pius X Festival Choir, our religious education music program, our roster of professional cantors, organists and guest musicians as well as our Concerts@SPX series. 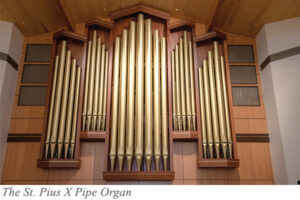 The pipe organ, built by Russell and Company from 2016 to 2018 in Chester, Vermont, has three independent divisions, Great, Swell and Pedal, controlled by an electric action console with two manual keyboards and one pedal keyboard. The console case is made of solid Honduras mahogany and walnut in the style of instruments made by noted American organ builder E. M. Skinner. The console has an internal dolly which allows it to be easily moved to the front of the church for organ recitals or concerts.

The organ has 51 stops controlling 37 ranks (sets of pipes) with a total of 2,105 pipes ranging in length from 16 feet to one quarter of an inch. (A rank of pipes is not unlike an orchestral instrument, in that each rank offers its own unique tonal quality.) Flute, Oboe, Clarinet and Trumpet voices are all represented in addition to the organ’s unique foundation of Diapason tone which creates a colorful and versatile ensemble well-suited to meet the needs of both liturgical and concert music. It has several special features including a Solo Harmonic Trumpet voiced on high wind pressure to add tonal excitement to the instrument, Chimes, and a full MIDI interface to assist the organist in using the instrument as a true music workstation. 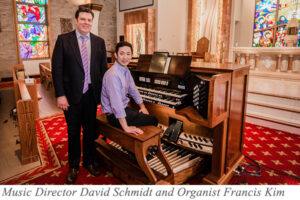 The organ was made possible by a bequest from our late parishioner, JoAnn M. Tursone, and donations from parishioners.

Year at a Glance

View a calendar of events for the entire year.
Click here.

Become a member of the Church of Saint Pius X Family.
Click here.

Volunteer and help…
… during the liturgy.
… in the Church Community.
… in an outreach project.