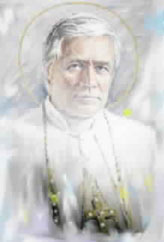 Giuseppe Melchiorre Sarto, nicknamed “Bepi” by his family, was born on June 2, 1835 in Riese, Italy, a farming village near Venice. He was the oldest of nine children. We know him today as Pope Saint Pius X. His father, Giovanni Battista Sarto, was a mailman and he died before Giuseppe was ordained a priest. His mother, Margarita, was a dressmaker and lived to see her son become the Cardinal of Venice. Two of his sisters became religious nuns and served under him in the Archdiocese of Venice.

Giuseppe was first in his grammar school class. When he was 11 years old, he told his father that he wanted to become a priest. His father, with the help of their local parish priest, sent Giuseppe to a well-known Catholic high school about six miles outside of town. Giuseppe graduated first in his high school class at the age of 15 and immediately entered the seminary in Padua. He graduated from the seminary first in his class in 1858 and was ordained a priest, Don (Father) Sarto. He was assigned to Tombolo, a farming village, as an assistant pastor for nine years. Don Sarto flourished with the help of his pastor. He was devoted to the Eucharist, enjoyed preaching and loved young people. His Masses were reverent, his sermons were carefully crafted and moving and, as the oldest boy from a large, poor family, he was able to relate to the poor youth in his parish. He began an after school program in Tombolo to help children learn more about their faith and develop their reading and writing skills. He also began a similar program in the evening for adults because his daytime program was so popular. Pius X is often credited with developing the foundations of modern catechism and adult education still held in parishes today.

Don Sarto was named pastor of Salzano at the age of 32 and he remained there for nine years until 1876. He was well known for helping poor farmers and cattle ranchers. He helped to fund schools and supported the local hospital when a cholera epidemic affected his parishioners. He rarely slept and so he earned the nickname, “Perpetuun Mobile”—a machine in perpetual motion. The Bishop of Treviso realized Don Sarto’s talent and energy so he promoted him to Monsignor and other important positions including the spiritual director of the local seminary and chancellor of the Diocese of Treviso. Monsignor Sarto was known for his quick wit and humility and his love of people. He enjoyed teaching, preaching and administering.

Monsignor Sarto was elevated to Bishop of Mantua on November 10, 1884 despite his protestations over not wanting to leave the seminary. He asked the Vatican to reconsider his elevation but the Pope responded with one word, “obey!”

As Bishop, he encouraged educated and energetic priests. Bishop Sarto adopted St. Thomas Aquinas’ teaching methodologies and instituted the Gregorian Chant for Mass. Within six years, the troubled Diocese of Mantua was turned into a vibrant diocese with spirit-filled masses and enlightening preaching.

Pope Leo XIII elevated Giuseppe Sarto to Cardinal on June 12, 1893. Upon hearing the news of his appointment, Cardinal Sarto told a local newspaper that he was “anxious, terrified and humiliated.” He immediately returned to his hometown of Riese to celebrate Mass for his elderly mother, family and friends. His mother passed away soon after he left for Venice. While Cardinal, Giuseppe continued to encourage education for priests and improved Catholic schools. He also raised money for the sick.

Pope Leo XIII died and Cardinal Sarto reluctantly accepted the position of Pope after a four-day conclave during which he won 55 out of 60 votes. He chose the name Pius because he said, “As I shall suffer, I shall take the name of those Popes who also suffered.” His coronation took place on August 9, 1903. During his papacy, Pope Pius was less formal and more approachable than his predecessors. He invited priests to dinner in the Vatican each evening and often snuck out of the Vatican through the garden passageways to visit the sick in local hospitals. He improved priestly formation, instituted improved liturgies and music and insisted on quality preaching from his priests and bishops. He modernized Canon law and introduced progressive scholarship through the biblical institute of Rome under the direction of the Jesuits. Pope Pius X also lowered the age for young people to first receive the Eucharist and fought against “modernism,” a theological teaching that he viewed as heresy and atheism. He preached forcefully against war and violence and had visions that a war would break out in 1914 killing many innocent people that turned out to accurately describe World War I. He did not live to see the long-term effects of the war but his prophecies live on. Pope Pius X supported immigrants from Europe who fled to North and South America. He created many new dioceses and appointed new bishops in the Americas.

In the last year of his life, he granted many private audiences with the poor and sick. Rumors of miraculous cures began to spread throughout Rome after people visited him. Two religious sisters who were cured through his prayers confirmed the healings after his death and endorsed his canonization to sainthood.

Pope Pius X died on August 20, 1914. The Italian press wrote, “Saint is Dead.” His tombstone is engraved with the words; “Pope Pius X, poor and yet rich, gentle and humble of heart, unconquerable champion of the Catholic Faith, whose constant endeavor it was to renew all things in Christ …”

Year at a Glance

View a calendar of events for the entire year.
Click here.

Become a member of the Church of Saint Pius X Family.
Click here.

Volunteer and help…
… during the liturgy.
… in the Church Community.
… in an outreach project.